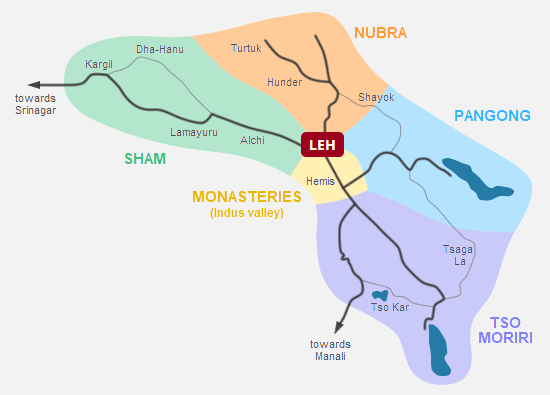 Our sightseeing tours (from Leh to Leh) cover all the areas of Ladakh:

One-way road trips from Leh to Srinagar and Manali are also available.

Several tours can be combined together to cover various areas of Ladakh according to your preferences, budget and time available.
See our tour packages and these travel itineraries for ideas. 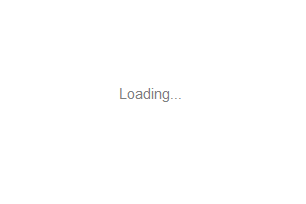 Short description of the sightseeing tours in Ladakh

Ladakh is strewn with gompas (Buddhist monasteries) and many of the most famous gompas are located near Leh, along the Indus valley. The one-day monastery tour includes the visit to the glorious Thiksey monastery that resembles the Potala palace in Tibet. The monastery is home to more than 80 monks and it enshrines a mesmerizing 14-metre-high statue of Maitreya Buddha. The picturesque Stakna monastery was built in the 17th century at the top of a rocky peak along the Indus river. Next, head to the highly revered Hemis monastery, the largest and wealthiest gompa in Ladakh. Inside, one of the temples houses an impressive statue of Padmasambhava, the founder of Tibetan Buddhism. The Chemrey monastery can also be included in this tour’s itinerary. In addition to the gompas, this tour also includes the visit to two palaces: the Shey palace was used as a summer palace until the middle of the 19th century and the Stok palace is the current residence of the Ladakhi royal family.

A tour in the Sham region is a must when visiting Ladakh. The Sham region is at lower altitude than other parts of Ladah; therefore, a Sham tour at the beginning of your trip in Ladakh is perfect for a smooth acclimatization.

In one or two days, you could visit the main highlights of Indus valley. Within the first 40 km from Leh, you can see the mysterious Magnetic Hill, Sangam (the confluence of Indus and Zanskar rivers) and the small Sikh temple known as Gurdwara Pathar Sahib. Further on the Leh-Srinagar road, you will pass through many villages and get to visit some of the most impressive monasteries of Ladakh such as Basgo gompa, Alchi gompa which enshrines the finest wall paintings of Ladakh, Likir gompa and Lamayuru gompa surrounded by a surreal landscape known as “moonland”. Other monasteries can also seen at Rizong, Phyang and Spituk.

With one or two extra days, you could go up to Kargil, the second largest town in Ladakh, and you could discover the Dha-Hanu valley and meet the people from the Brokpa tribe.

The Nubra valley tour is often done in two days. The itinerary includes the visit Diskit gompa, the largest monastery in the valley, perched at the top of a rocky hillock. Near the monastery, there is a gigantic 32-metre-high Chamba statue. 10 km from Diskit, along the Shayok river, the Hunder sand dunes are a unique sight that cannot be missed. You can hike across the rolling sand dunes or go for a camel ride. The double-humped Bactrian camels living here were brought from the Gobi desert in Mongolia when Hunder was a stopping point for the caravans travelling on the old Silk Road between Central Asia and India. Then, you will visit the Samstanling monastery located in the pretty village of Sumur on the bank of the Nubra river.

If you have an extra day for this tour, you could explore Turtuk, India’s northernmost village situated just 12 km from the border with Pakistan. Turtuk is inhabited by Balti people, a Muslim community of Tibetan origin with a unique culture and traditions. You could also stop at Panamik to relax at the hot spring that is believed to have medicinal virtues.

The gorgeous Pangong lake, located at an altitude of 4,250m, became famous in 2009 when the final scene of the Bollywood movie “3 idiots” with Aamir Khan and Kareena Kapoor was shot on its banks. The lake is 140 km in length, but only 30% of the lake is in India while the rest in Tibet. The Pangong lake tour can be done in one long day via Chang La pass, but it is highly recommended to do the tour in two days so that you can have more time to enjoy the beauty of the lake. Moreover, in two days, you will also have time to visit the interesting monasteries on the way such as Chemrey, Hemis, Thiksey, and Shey.

Tso Moriri lake is the highest mountain lake entirely within India, located at an altitude of 4,530m. It is 26 km long and 5 km wide, surrounded by spectacular mountain ranges culminating above 6,000m. It takes approximately 7 hours to drive from Leh to Tso Moriri. Therefore, the Tso Moriri lake tour is usually done in two days, with one night in Korzok, the only village on the bank of the lake. On the first day, on the way to Tso Moriri, you can stop at Chumathang hot springs. On the way back to Leh, you will go via Tso Kar lake where you might be able to spot the beautiful black-necked crane if you are lucky. Then, you will drive across Taglang La pass (5,328m) before reaching Leh. At the beginning and at the end of the tour, you could also visit some of the famous monasteries located near Leh such as Hemis, Thiksey and Shey.

This tour is a big loop that covers almost all the areas of Ladakh except Sham. The tour can be done in 4 days, but it is recommended to do it in minimum 5 days because there is a lot of driving. During the first part of the tour, you will visit the Nubra valley. Then, you will head to Pangong lake via the Shayok road. Next, you will drive to Tso Moriri lake. Finally, you will go back to Leh via Tso Kar lake. There is also an option to end the tour in Manali.

The road trip from Leh to Srinagar usually takes two days, with one night halfway in the town of Kargil. On the first day, you can stop at Gurdwara Pathar Sahib, Magnetic Hill and Sangam and you can also visit Basgo monastery, Likir monastery, Alchi monastery and Lamayuru monastery. Another option is to drive to Kargil via the Dha-Hanu valley and Batalik. On the next day, you will pass through Zoji La pass and Sonamarg before reaching Srinagar, the capital of Kashmir.

The drive from Leh to Manali is one of the most adventurous road trips in the Himalayas. It crosses several high-altitude mountain passes, the highest point being the Taglang La pass at 5,328m altitude. The 470-km-long road trip is done in two days with one night in Sarchu or Jispa. During this road trip, with one extra day, there is an option to do a side trip to Tso Moriri lake.

Every tour can be organized with a private taxi. When you book a private taxi, it means that there will be just you (your group) and the driver in the car. The car will not be shared with other passengers.

Most of the tours can also be arranged with a shared taxi. This is a great option for solo travellers and small groups who would like to share a car with other people. The more passengers in the shared taxi, the cheaper price of the tour per person. A shared taxi has a seating capacity for 6 passengers and a driver.